How to use Your Fingers to Heal Yourself

How to know that your child is depressed

Ghost stories have always been an intricate part of our childhood. Worldwide paranormal occurrences have caught more attention than any other news or stories shared by media, individuals or societies. And some of us have even had first-hand experience incidences related to it.
Whatever it be, paranormal stories to date remain shrouded in mystery, suspense and sometimes horror, emotions wonderfully presented by the cinema industry globally.
Let us take a short trip to India’s most haunted places and experience your spine chill…

Caution: Do not visit eerie Bhangarh Fort after dark!!

Bhangarh fort is located in the ruined city of the same name, somewhere between Jaipur and Alwar, in Rajasthan. The place is so haunted by paranormal activities that even the Archaeological Survey of India has put up a board that restricts people from visiting the fort area before sunrise and after sunset.Legend has it that a tantric named Singhiya fell in love with a princess from the fort. He tried to use black magic to get her to fall in love with him, but it backfired and he died. Just before his death, he cursed the fort saying all who lived within it would die.
Today, villagers who live in the area continue to build roofless dwellings because everytime they do build a roof, it inexplicably collapses. People have also mysteriously gone missing after-hours inside the fort. It’s an hour and a half by road from Jaipur on the Jaipur-Alwar road.

The film ‘Bhootnath’ had a scene shot in the Church of the Three Kings!

There is a scene in the Bollywood film ‘Bhoothnath’ set in the Three Kings church, situated atop a hill in Cansaulim, Goa. This church is reputedly haunted as it was the site of a meal given by one king who wanted to gain power over another two, and poisoned them. The story goes that the third king eventually killed himself also by poison, possibly out of guilt. The church is now haunted by the spirits of these three kings.

Mysterious whispers are carried on the wind at breezy Dumas beach

As soon as they enter this beach area, dogs are known to behave strangely. This might not come as a surprise to you once you learn that this beach is where Hindus were cremated and, after dark, people on the beach claim to hear whispers on the wind telling them to return home. They say it’s the voices of the tormented souls that have remained behind after cremation and now haunt the beach. Fly to Ahmadabad and take a train to Surat. Dumas beach is about 20 kilometers southwest of Surat and you can get a bus from Surat railway station to the beach.

If you listen carefully you might hear a young prince shouting, ‘Uncle save me!

The story goes that a young prince was brutally assassinated in this famous Pune fort when he was still a teenager. While the prince was chased by his assassins, running for his life across the fort, he shouted, ‘Uncle save me.’  On full moon nights, people in and around the fort claim to hear these same words reverberate around the fort walls.
If you listen carefully you might hear a young prince shouting, ‘Uncle save me!

Possibly the most haunted place in Mumbai, Grand Pradis Towers is a residential block located in one of the most affluent areas of Mumbai – Malabar hill. A flat located on the eighth floor was the site of a series of suicides even resulting in the death of three generations of one family that lived there, within a year.The building society has recorded up to 20 cases of fatal accidents and suicides since the building was built in 1976. Apparently, the incidences have stopped since the society did a puja and a havan, but the flat remains unoccupied.

Hill stations already have the reputation of being atmospheric, mysterious places due to their relative isolation and silence. Tunnel No. 33 (also referred to as Tunnel 103) is one of the tunnels on the Shimla-Kalka railway route. This is where the friendly ghost of Colonel Barog loiters, in search of friendly chats with people who take the tunnel. Colonel Barog was a railway engineer during the British Raj who committed suicide due to a gross miscalculation while the engineering work for the tunnel was ongoing. He was fined but the humiliation of his error and reprimand turned out to be too much for him. They say his spirit lingers on in the tunnel, albeit he’s the chattiest ghost around for miles!

This cemetery is an attractive tourist spot, known for its classical Greek and Palladian structures. The cemetery was built in 1767 and is burial grounds for British soldiers. There is an urban myth that has gained stronghold however that a group of friends taking photos at the site managed to capture the appearance of a mysterious fist in one photo frame. The friends then started experiencing inexplicable illnesses soon after the incident. Others say that there is a foggy figure that cuts through the early morning mist on some days. Visit at your own peril!

Don’t walk alone to the dry bottom of the stepwell!

This extraordinary stepwell is surprisingly found hidden among the buildings of Connaught place in Delhi. Made of red stone and lined with many arched niches, it has 103 steps that used to lead into water, but the bottom of the well is usually dry now. It’s the deep black waters of the well that were claimed to be haunted… purported to draw disheartened and depressed admirers towards it with a magnetic effect, where they would give in to the hypnotic lure and drown to death in the waters. 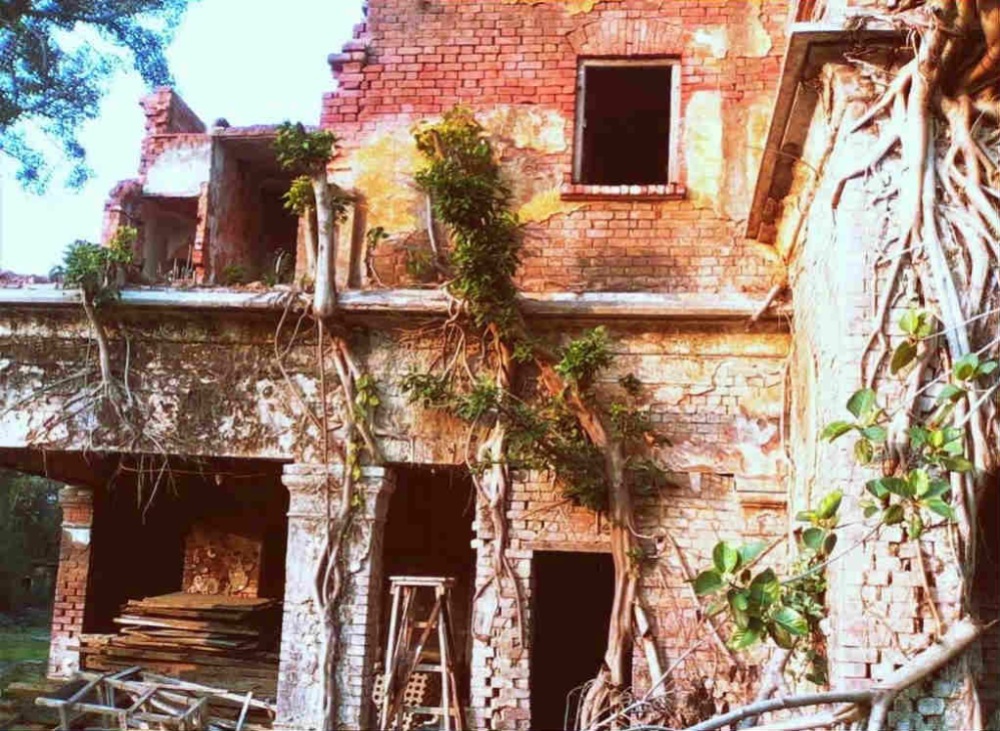 Meerut’s GP block is a compound of three long-abandoned buildings located in the city’s Cantonment area, next to a known school. However, it’s only recently that locals have been exchanging stories about boys seen drinking beer on the rooftop of the double-storied buildings and some have seen a girl in a red dress come out of one of the buildings. Others say they’ve spotted four men sitting at a table with a lighted candle inside the building and drinking beer. Urban myth or actual haunting? Rent a car to find out ! It is a couple of hours drive from Delhi to Meerut.

Many will have been to film city and say that they didn’t find anything unusual while seeing the sights, but it’s actually people staying in the hotels within the film city that have had sightings of paranormal activity. Some claim they’ve heard knocking on doors when no one is around and others have seen mysterious figures disappearing and re-appearing. Stay overnight if you dare!

Kolkata’s National Library was once the residence of the Lieutenant Governor of Bengal, but is now the state’s Central Public library, housing many rare books and journals. Guards are afraid to take night shifts at the library and people have reported hearing a woman’s footsteps. Some labourers lost their lives during renovations in the building and some claim to see their apparitions appear and fade before their eyes.

Kurseong, a hill station located about 30kms from Darjeeling, has a place called Dow Hill which is renowned for its spookiness within some boarding schools. People have claimed to hear inexplicable footsteps around the empty corridors of the boys’ boarding school during school vacations. Woodcutters working in the forested areas nearby have seen a headless boy walking around, who then vanishes through the trees. The odd sightings are attributed to various murders that have taken place in the area. Kurseong is one of the stops on the Darjeeling Himalayan Railway, which you can board at New Jalpaiguri railway station. Arrive at Bagdogra airport and take a taxi or rickshaw to the railway station. Wander in these woods at your own risk

This is the most Powerful Protection against Negative Energies